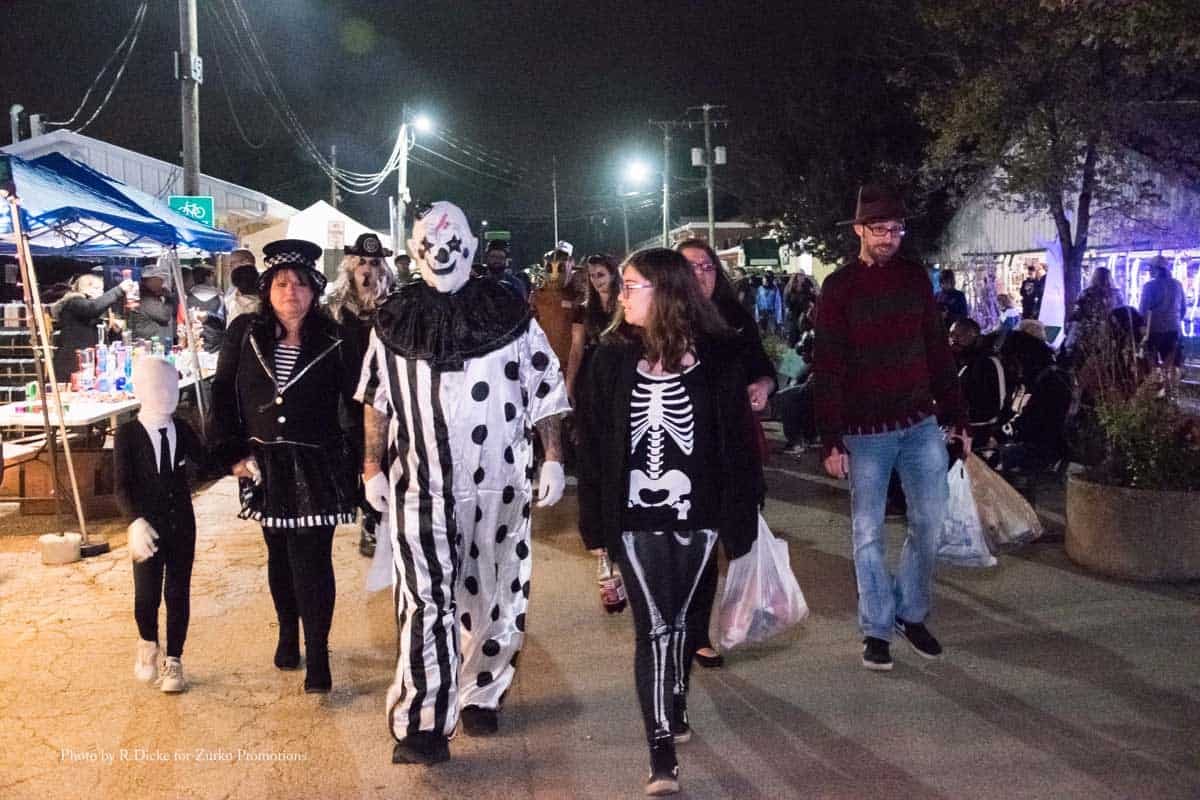 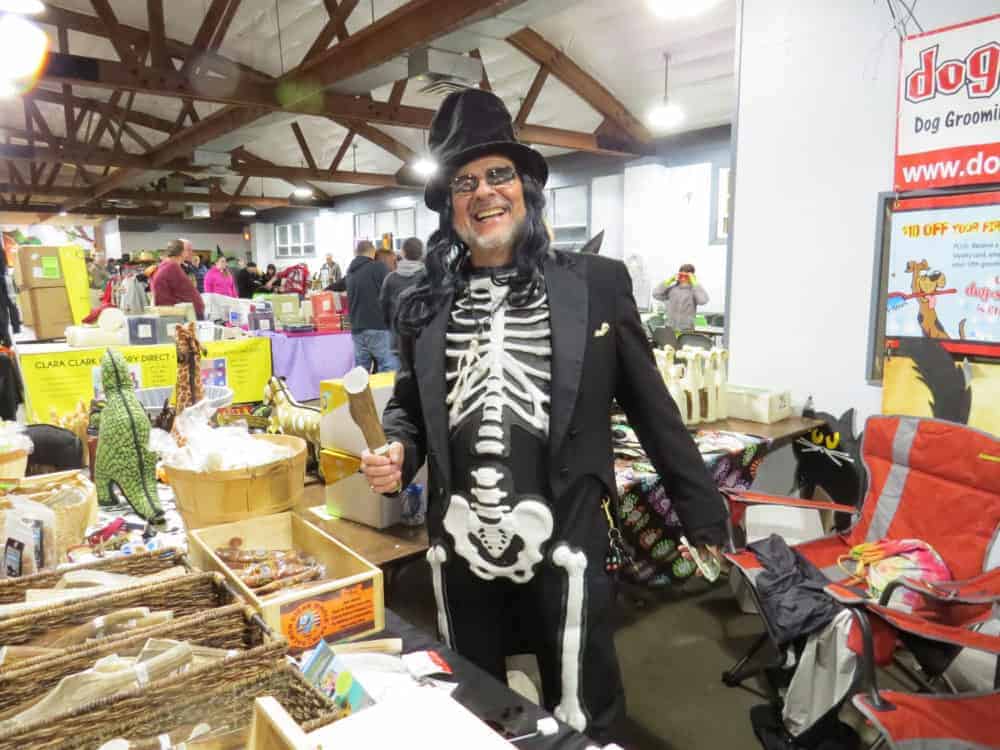 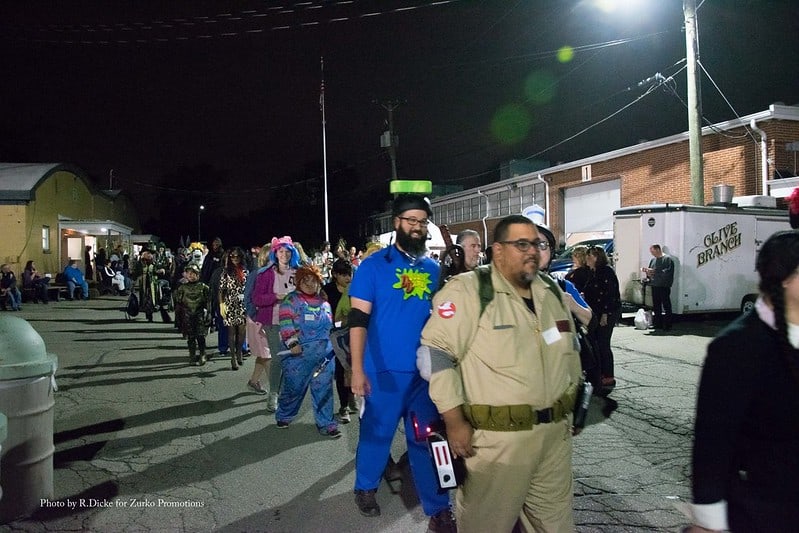 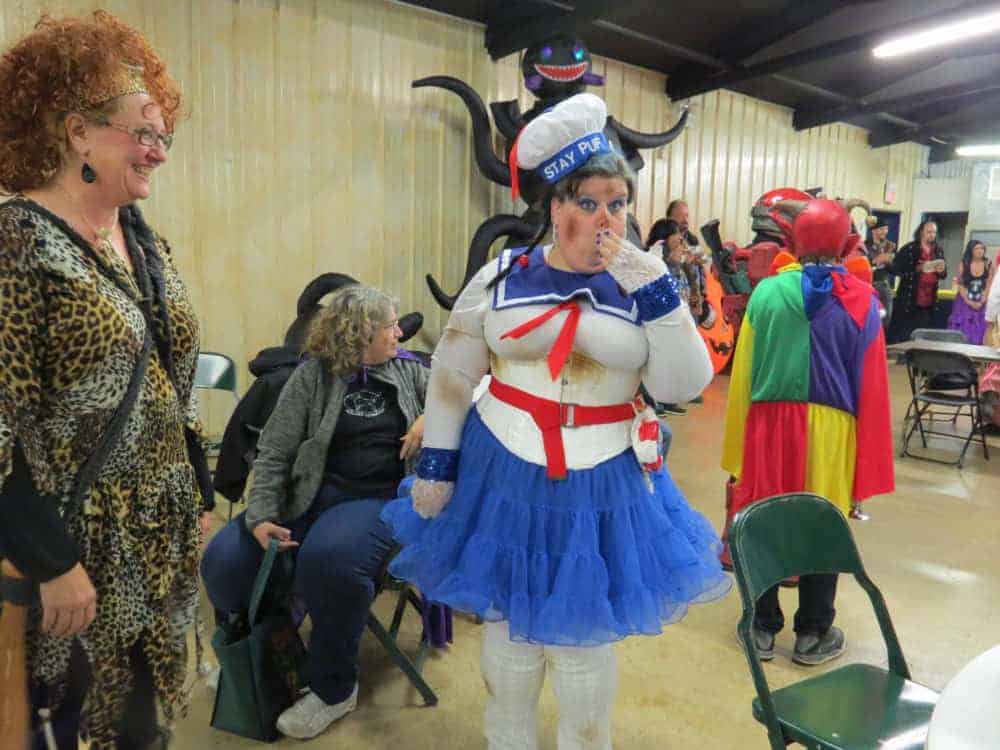 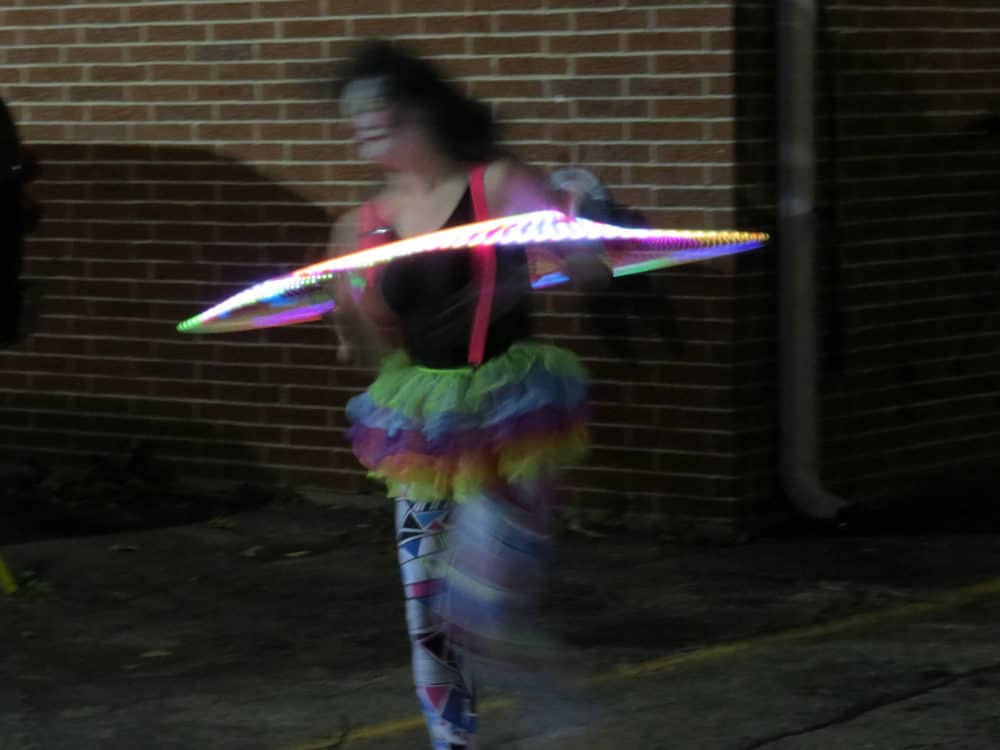 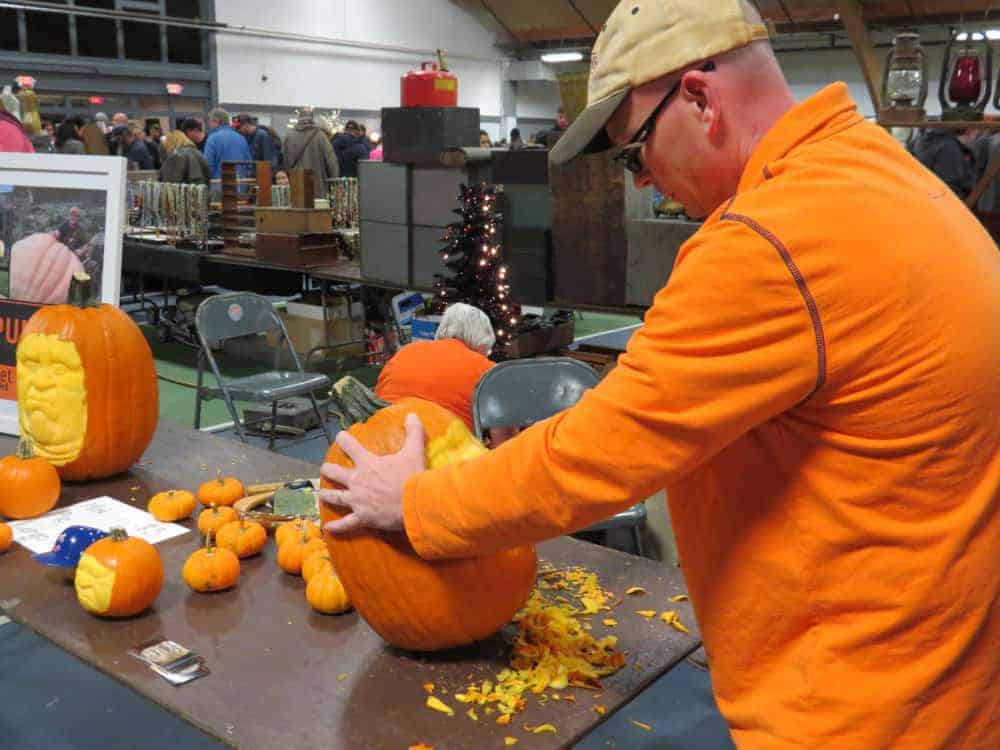 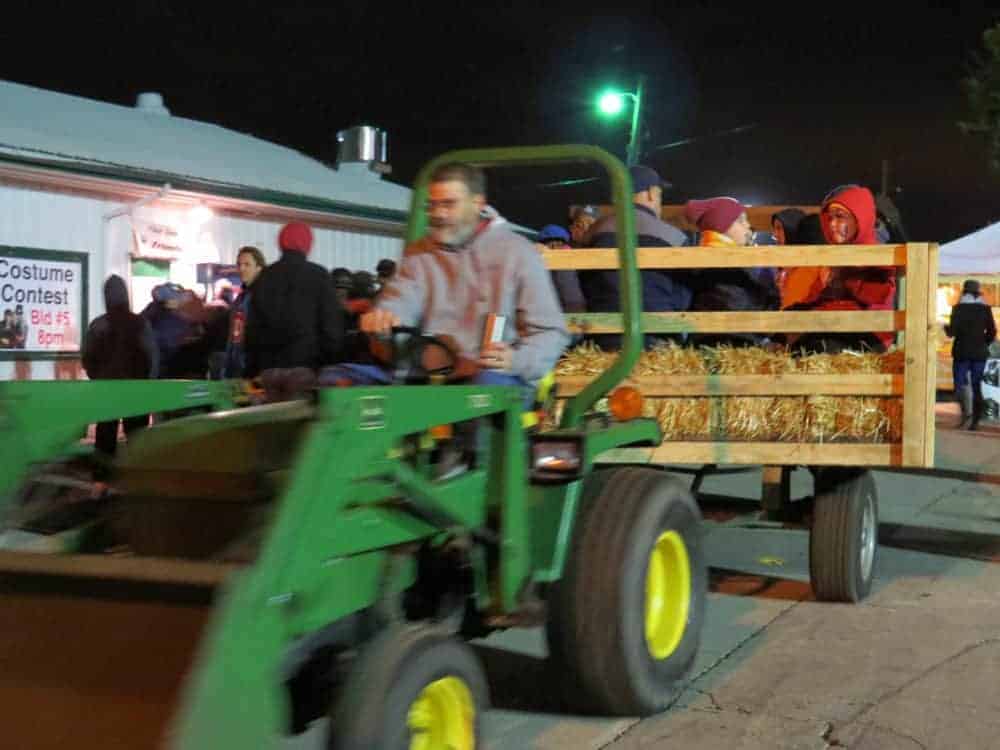 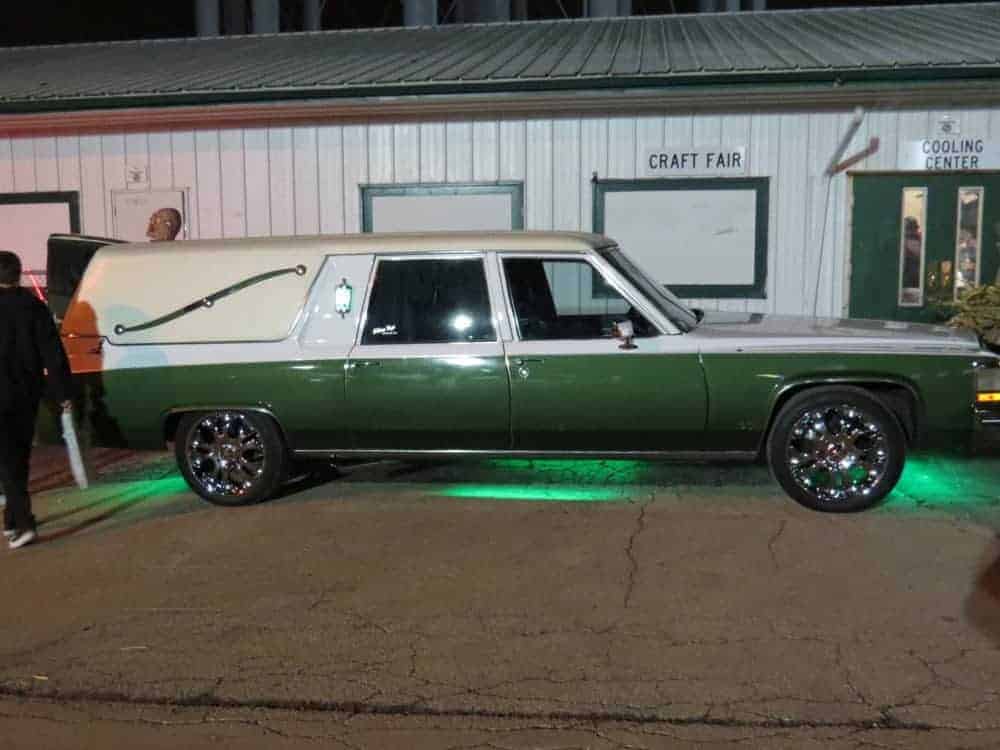 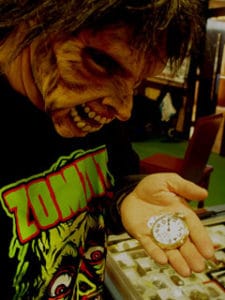 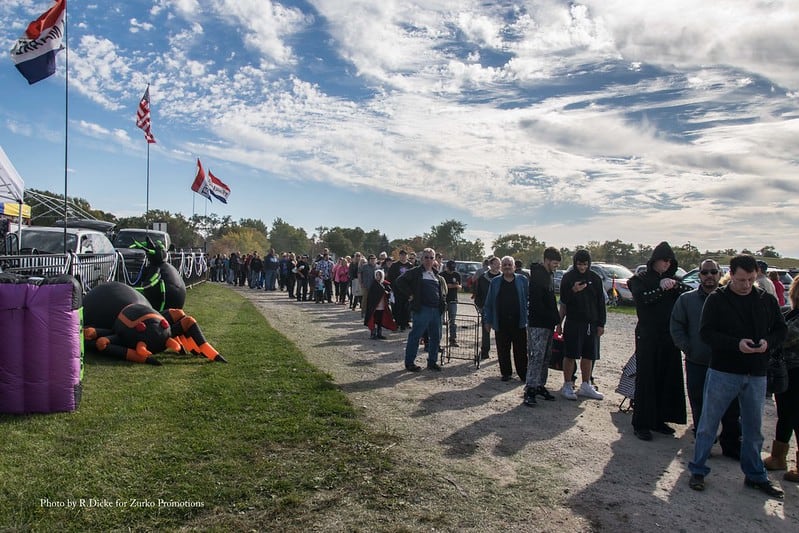 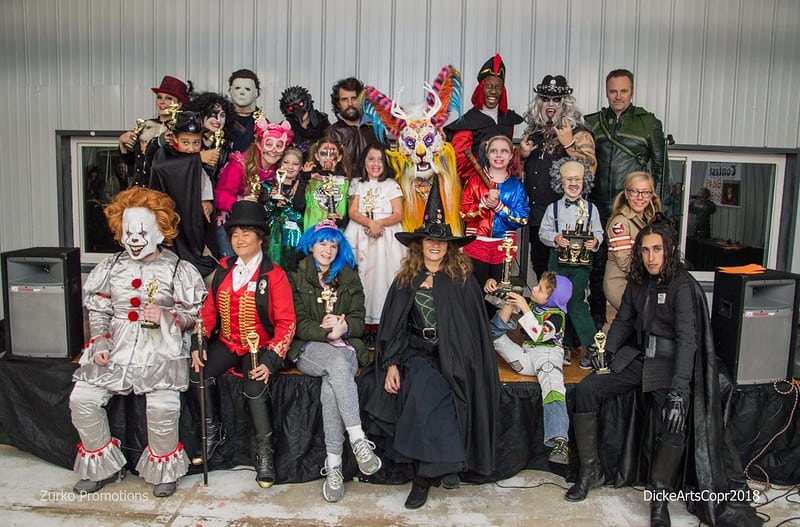 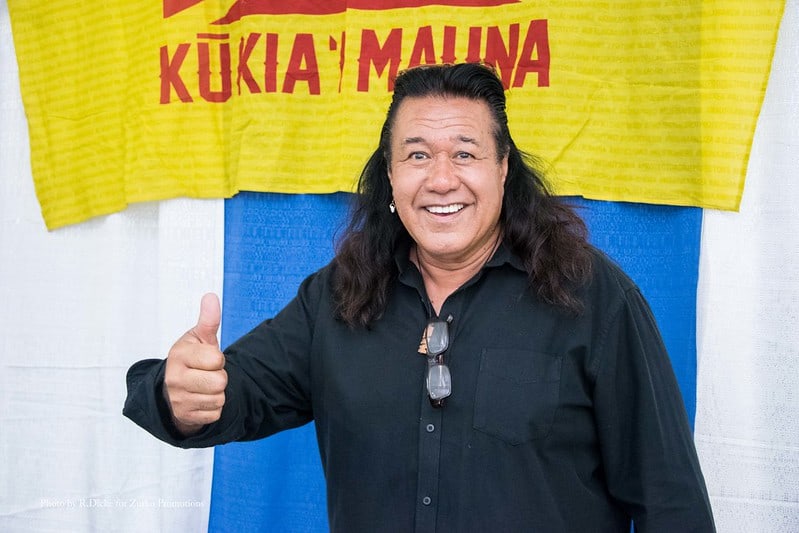 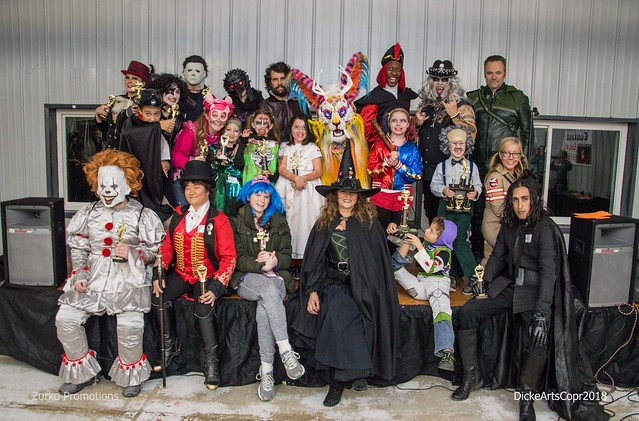 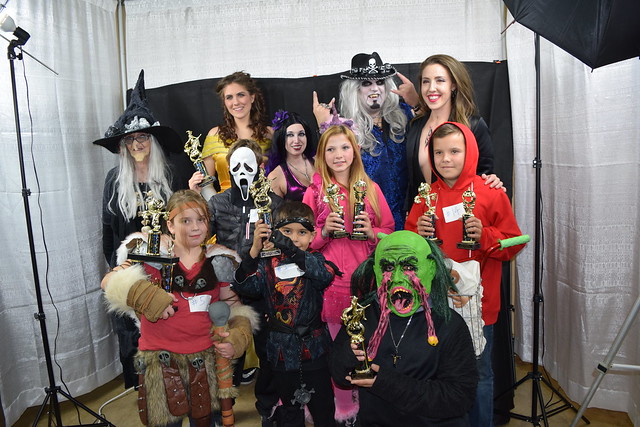 By Jack Kelly The Antique Trader

“This is more of a ‘happening’ than just shopping experience,” said one visitor as she entered the DuPage County Fairgrounds for the First Annual Wheaton, Ill., Haunted Halloween All-Niter Market Oct. 29, 2011.

Promoter Bob Zurko pulled out all the stops as he offered a fairgrounds full of vendors with collectable goodies along with a varied schedule of attractions including a costume ball, live bands, hay rides, a beer garden, a pumpkin carving contest, a costume contest, an autograph table stocked with movie/TV stars and WWF wrestlers.

Many shoppers and vendors were dressed for the event, with witches, goblins, ghouls and zombies roaming the fairgrounds. It was the first time setting up at Wheaton for Katheryn Burgess, who – dressed like a black cat – traveled nearly 10 hours from Ely, Minn.

Many stopped to admire her 1910 Roseville Mostique jardinière and pedestal set, priced at $900, while others rested in her refinished 1870s mahogany Merklin twist chair with brass lion’s heads on top-end pieces, priced at $795. She said the chair was rescued from a farmhouse by her father, who stripped six different colors from the unusual piece.

Another first-time-dealer was Jerry Runge of Rockford, Ill., who offered an oddball early 1900s cast iron 8-foot-tall railroad whistle-stop-post sign that he estimated weighed “200 to 250 pounds.” It was found an estate sale and offered at the show for $900. The dealer also offered a 1930s machinist toolbox that he said “opened like a puzzle” with multiple intertlocking trays. “I’ve seen lots of toolboxes but never one like this,” Runge said as he attached a price tag of $150.

Youngsters did a double-take as they passed the booth of Casey Lewandowski of Berwyn, Ill., because the vendor was dressed in a full Santa Clause outfit including a long white beard. The youngsters checked out his table full of collectable 1950s cap guns bargain priced from $12 to $17 each. Adults looked over a selection of more than 200 both sterling silver and silver plate items offered by “Santa.”

It was a short drive to the fairgrounds for Randy Meyers of nearby West Chicago, Ill., who said, “Refurbishing is my life.”

The dealer pointed with pride to a 28-inch-square ceramic tile top table that was constructed with a cast iron 1950s base. The table top was framed with mahogany trim once used as hand rails in a turn of century Chicago mansion. The “new-old” piece could taken home for $200. “I try to monopolize on different stuff,” he said, while also showing a 1960s solid teak 24-inch-tall stool shaped like a human foot.

Costume jewelry filled the booth of Ann Bemis of Fort Atkinson, Wis. She said her favorites included a 3 ½-inch blue rhinestone brooch with three-color aurora borealis stones for $40 and a 16-inch malachite necklace for $30. Bemis said she was a regular dealer at the Zurko Promotions Grays Lake Ill. Market held the second Sunday of each month “and Saturday before.”

Those with a taste for more expensive collectable timepieces were drawn to the booth of Chicago watch dealer Richard Ellison. Pocket watch collectors checked out his 21-jewel 1928 Elgin railroad timepiece for $335. Still others were drawn to a 1910 salesman’s sample 21-jewel Hamilton pocket watch with visible mechanical works priced at $380.

Some came to the big event in costume, while others just enjoyed watching others. Janice Sloan, who recently moved to Chicago from Ft. Lauderdale, Fla., with 7-year-old daughter Makenzie said, “We just came to look, but I collect antique jewelry and like what I’ve seen so far.” Makenzie was a successful shopper, purchasing some antique feathers.

As the show closed at the strike of midnight, under giant floodlights, show promoter Bob Zurko beamed and said, “Awesome,” adding, “It was one of our best crowds to date and many said it was a real scary fun time.”