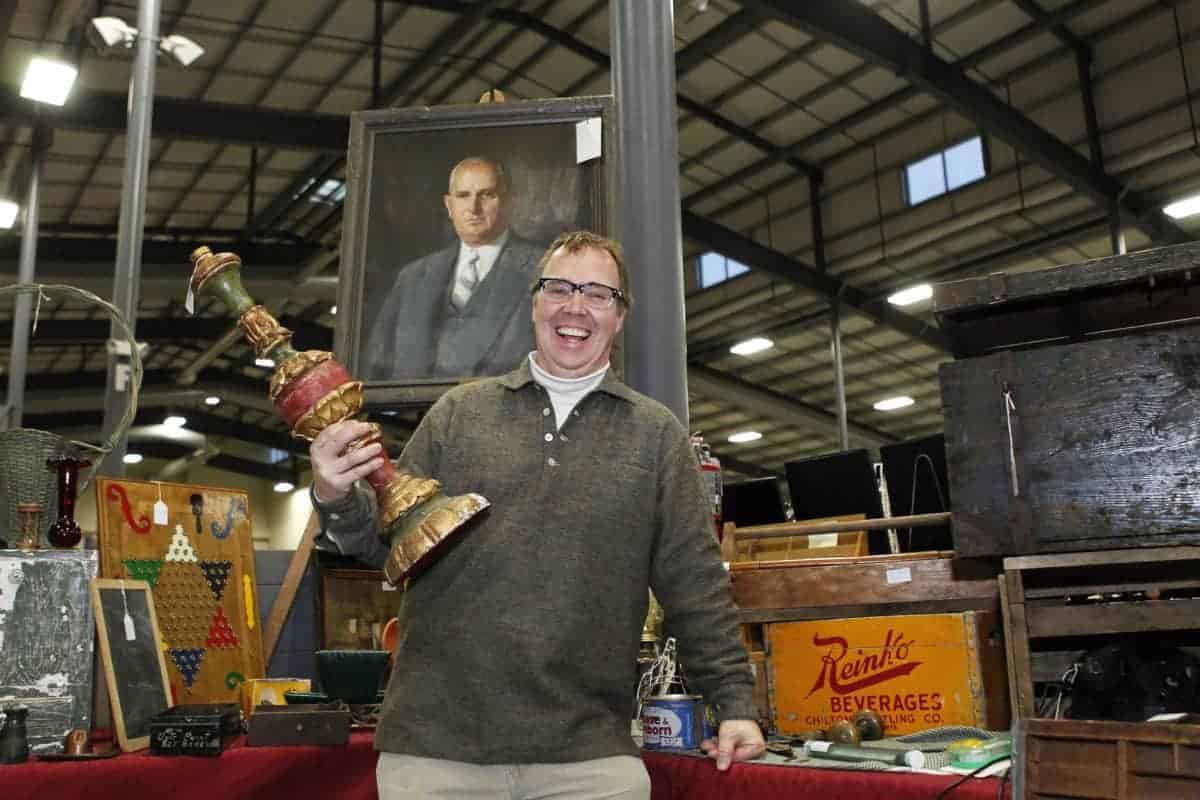 Show Hours: Saturday 9am to 4pm and Sunday 9am to 3pm / $8 (TICKETS AVAILABLE AT THE EVENT)
ADMISSION IS GOOD FOR BOTH DAYS!
Free Parking. *Children 12 and under are free with an adult
Early Buyers Saturday 8am to 9am / $25 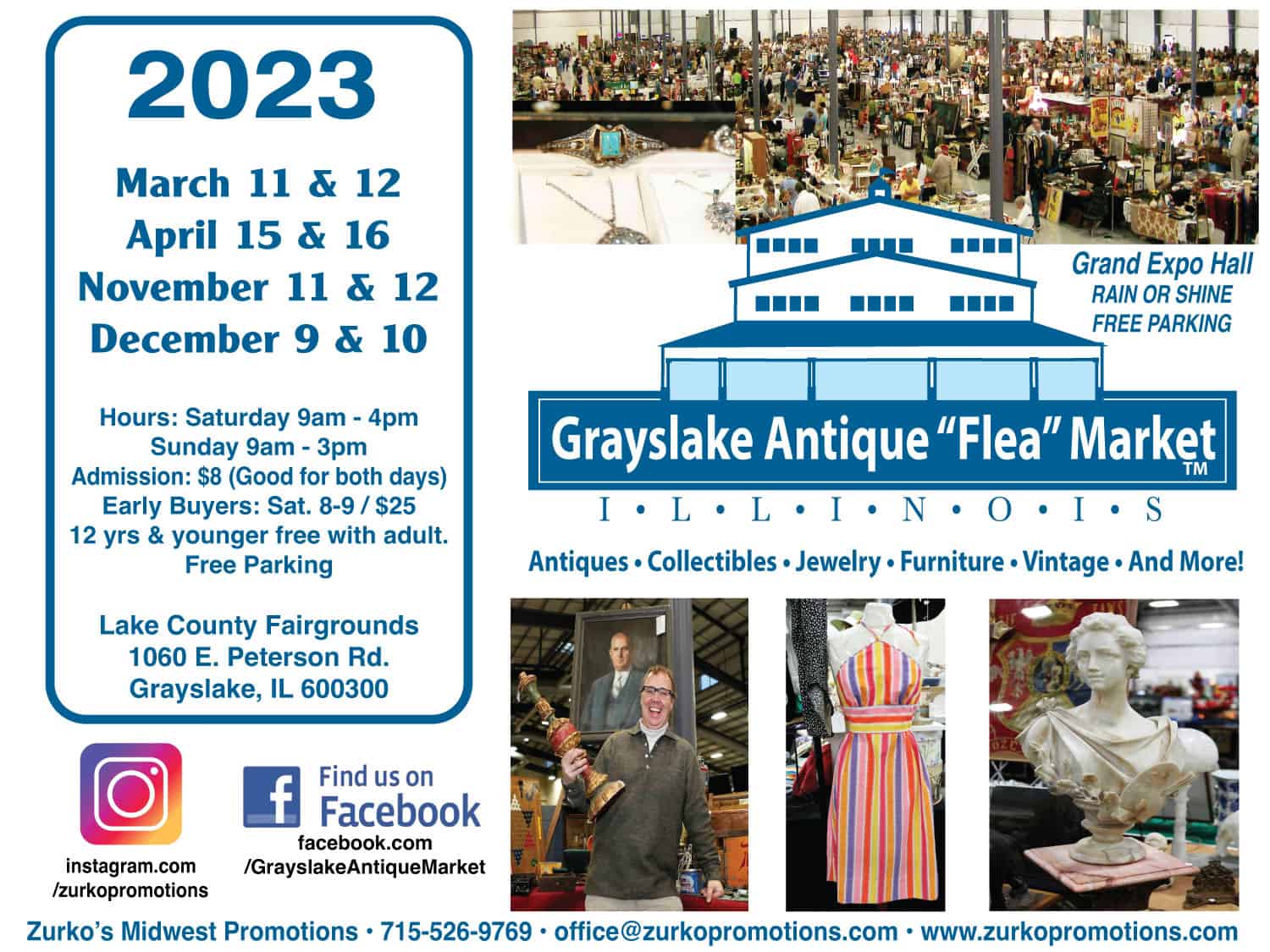 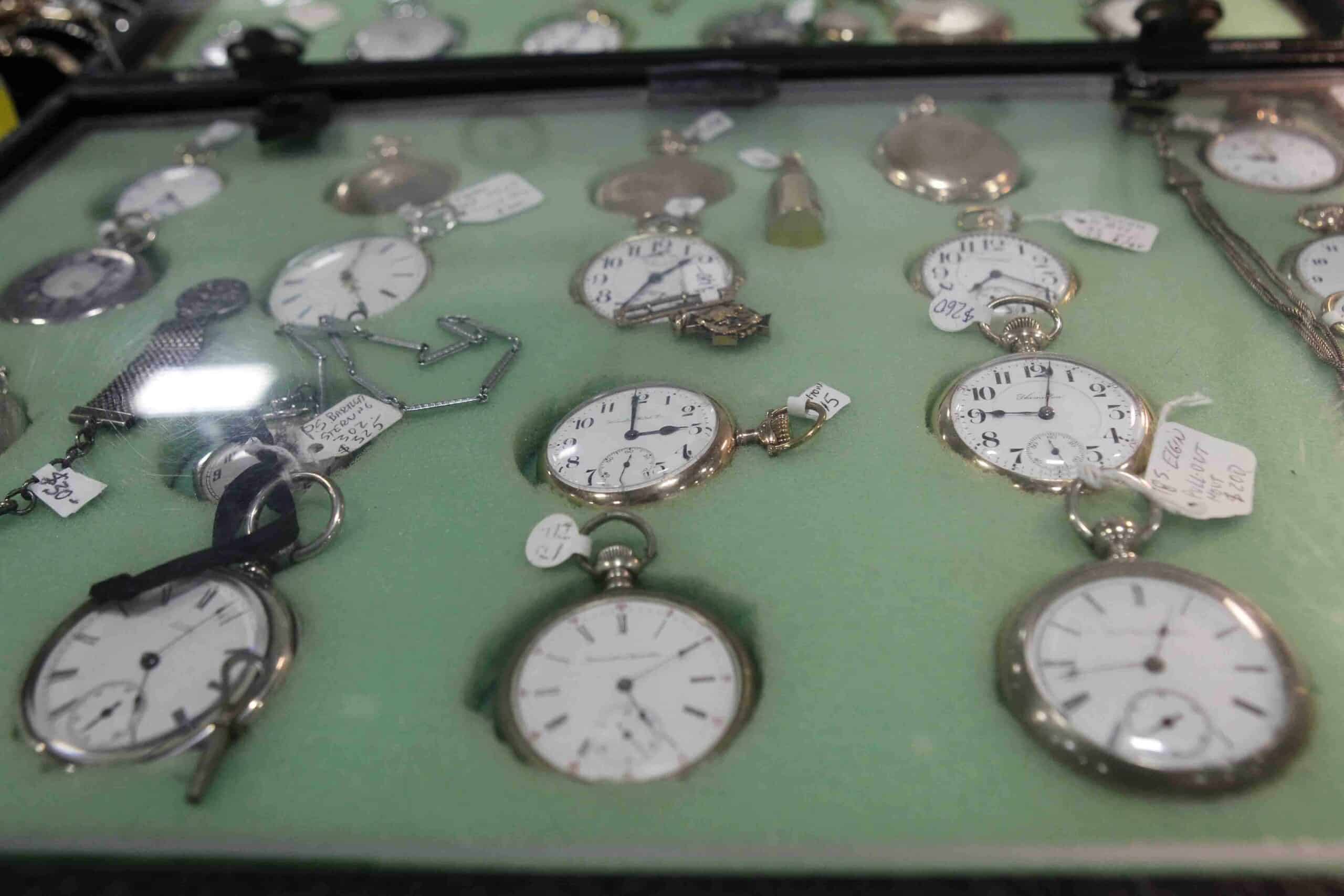 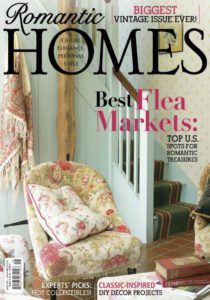 Romantic Homes Magazine listed the Grayslake Antique Market as one of the top Antique Vintage Flea Markets in the U.S. and in Illinois.

Rummage through a spectacular variety of antiques at the monthly Grayslake (Chicagoland) Illinois Antique Flea Market!

The Grayslake Illinois Antique Flea Market opens on the second Sunday of the month and the preceding Saturday. During the summer this market almost doubles in size, that is when sellers all come out of hibernation to showcase their antiques and retro goodies.

It can be really enjoyable to look at antiques from the past with the family. Explore the past together and start up conversations about the history of the items you are looking at. Bonus, you never know if the antique you find is a hidden treasure worth lots of money!

Each item at the Grayslake Illinois Antique Flea Market has a story to tell, whether it’s a retro 1950’s apron that was used to protect a suburban housewife from splashes in the kitchen or a silver hand mirror engraved with intricate roses and leaves – these objects have lived long and interesting lives.

Despite the sagging economy, antique collectors and holiday shoppers with an eye for the vintage and whimsical were out in force at the Grayslake Antique & Collectible Markets on the weekend.

The soggy weather Saturday, with downpours at times, hardly dented the buyers’ spirit. Bob Zurko, promoter of the two-day show, estimated a record attendance of 3,000 people before it was over at 3 p.m. Sunday. The show with 220 exhibitors from all over the Midwest was held in the exhibition hall at the Lake County Fairgrounds in Grayslake.

“In this or any economy, people want to put their money into things that will go up in value,” said Zurko of Shawano, Wis., who has been promoting the monthly show for over 35 years.

“Collectors will go out of their way to find unusual, special items that have intrinsic value,” he added.

Unique items included a Sept. 3, 1943, issue of Newsweek with Adolf Hitler on the cover from Kamin’s of Elgin, asking price $25; a toy cement truck from the 1920s from Don Swetzig of Holy Hill, Wis., priced at $1,995; an 1863 water color with a religious theme from Laura Barry of Chicago, just $65. Clint Pagel, a jeweler from North Liberty, Ind., carried collections from Czechoslovakia, and also from India and Mexico.

Unlike at regular stores, you can bargain down the price, which makes it all the more appealing for buying at a fair such as this.

Nick Bizzoni from Rockford listed a statue of Nipper of his Master’s Voice fame for $165. It attracted a few prospective buyers, including one woman who said she wanted to talk to her husband first. Well, she was a bit too late.

Nipper, which Bizzoni estimated to be 50-60 years old, quickly found a new home when another buyer appeared. The man bargained it down to $140, which Bizzoni quickly accepted.

“You’ll love it. It’s a collector’s item,” he said as he gingerly placed it in a bag for the buyer.

Janet Ecklebarger of Addison bought a General Electric toaster, made in the 1950s, for her daughter’s birthday.

“I just like the look of it,” said Ecklebarger, as she was writing a check for Rick Rhodes of Midwest Toaster Authority, which also sells vintage waffle makers. One toaster on display, dating back to 1929, had a mechanical timer on it. The asking price: $100.

Bob Marques of Racine, Wis., bought a swan TV lamp from the 1950s, which he happily called “a good deal.”

“I just love the show. I’ve been here a dozen times. I keep on coming back because it has higher-end things,” said Marques.

A buyer from Lincolnshire who gave her name as P.J. Ellis bought Irish linen and other things from Kathy Costano of Grayslake, who also sells chandeliers and silverware.

“This is a good place for Christmas shopping. I’ll come back,” she said, showing her bag filled with two stuffed animals, a bunny and an owl.

Participants, dealers and the public like the location, as compared with the old fairgrounds, because, as Zurko said, ii is “convenient, with air-conditioning in summer, easy access to restrooms and plenty of parking.”

This Grayslake (North Chicago) Illinois Antique Flea Market is a cozy, friendly and relaxed atmosphere. 1,000’s of antique treasures and flea market items. Oddities and loads of antiques collectibles selected with a good eye. The Grayslake Chicago Illinois Antique Flea Market is an interesting place to visit, especially if you are tired of visiting museums, flea markets with new items, or looking for something to do in Grayslake (North Chicago) Illinois.