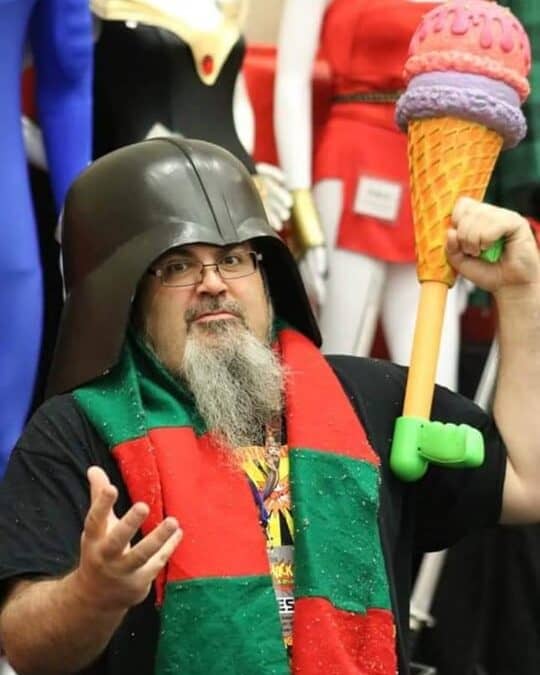 James Azrael is a musician, author, film producer, and actor…but most well known as the founder and head curator of The HSPPA; The Horror & SciFi Prop Preservation Association is a not-for-profit traveling museum of screen used props and wardrobes whose mission is to share and promote prop conservation so these treasures of filmic history can be enjoyed for generations to come.

James began his career in Chicagoland radio in 1996 and had left radio to pursue music with his band, Court Jester, full time by 2000. Court Jester’s first CD “Gina” in 2003 paved a strong footing for the band nationwide with a video for “Stand Up” on MTV2. The 2006 follow up, “Strangeland” honed the bands sounds, featured the addition of Dizzy Reed (Guns N Roses) on piano/keys and saw two charting singles, “Hollywood Girl” and “Needles To Say.” Court Jester, while never officially disbanding, seemed to call it quits by 2010 after being unable to cope with the passing of drummer, Jon “JS” Stern.

In 2015 James launched The HSPPA and has been operating that full time since; while authoring 3 HSPPA books and producing/acting in film [“It’s Just A Game” (2020)]. James also currently owns and runs a movie prop museum in Las Vegas (Cineloggia) with SFX artist Nick J Benson [Society, ANOES 4, The Blob] and a horror themed gluten-free bakery (Spooky’s Swirls) outside of Phoenix with three Curators of The HSPPA.