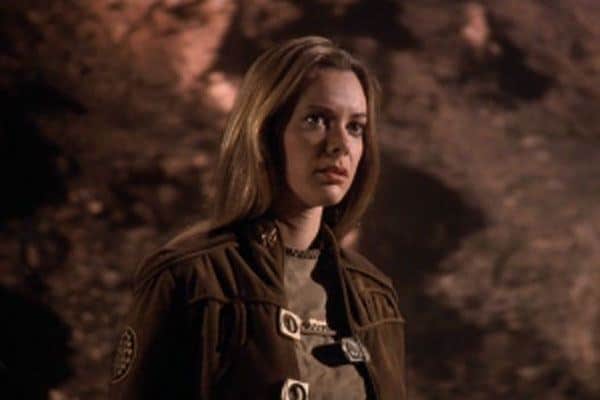 Anne played Lieutenant Sheba on the classic BATTLESTAR GALACTICA series, and has appeared in countless other TV shows including THE INCREDIBLE HULK, KNIGHT RIDER, AIRWOLF, SIMON & SIMON, DIAGNOSIS MURDER, THE WEST WING, LAW & ORDER, CHICAGO FIRE and even an episode of BUCK ROGERS!

Actress, writer, producer, and director Anne Lockhart can look back over 100 years to trace her theatrical roots.

She was born Anne Kathleen Maloney on September 6, 1953 in New York City and grew up in Brentwood, California. Born to one of theatre’s leading families, she is the fourth generation of performers in her family to carry the Lockhart name, as the daughter of actress June Lockhart, granddaughter of Gene Lockhart and Kathleen Lockhart, and great-granddaughter of John Coates Lockhart. Her mother is known for her years on the television series Lassie (1954) and Lost in Space (1965).

In addition to her long list of film and television credits, Anne has had a prolific career as a voice actress since 1975. Mostly uncredited, she remains one of the most “in-demand” voices in Hollywood. As writer, among other stage and film work, Anne has performed her original one-woman piece on “Frenchy McCormick” across the country, since 1999. An accomplished stage actress, Anne’s work “on the boards” continues. Her stage debut at age 18 in New York (“40 Carats”) was followed by multiple national tours of other theatrical productions. As well as appearing in contemporary as well as classical works, Anne is an accomplished Shakespearean actress, having appeared in many productions of the Bard’s work. Anne founded and continues to serve on the Board of the “Kingsmen Shakespeare Festival” in California.

Single mother to daughter Carlyle Taylor and son Zane Taylor since 1994, she keeps a busy working schedule and divides her time among homes in California, Texas, and Montana.

The Wheaton Haunted Halloween Flea Market October 17, 2020 will be held at the DuPage County Fairgrounds, Wheaton, Illinois. All guests are subject to change or cancellation without notice.